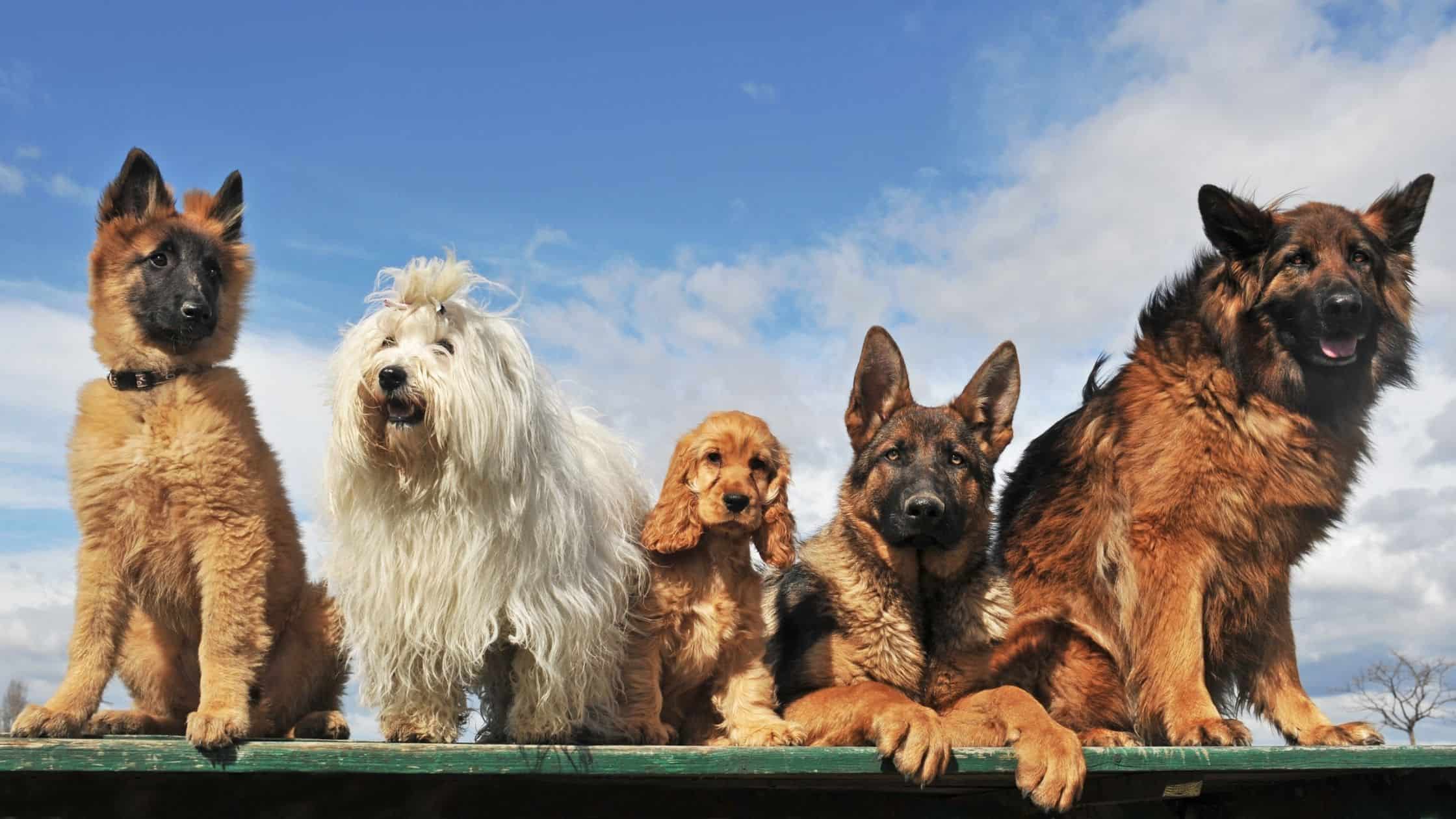 Brought to you by the writers at Sugar Pet Shop.

Dogs come in a variety of breeds, some of which you may never have heard before. While there are over 350 recognized dog breeds by International Canine Federation standards, there are also extinct dogs that have come and gone over the years.

Sadly, quite a few dog breeds may no longer exist in the modern world. Dogs tend to disappear out of sight due to people no longer finding these dogs fashionable or no longer needed in the household. For these reasons, extinct dogs are a more common occurrence than you might realize.

In this article, I am going to provide you with information about 15 extinct dog breeds so you can learn more about what happened to extinct dogs and how we can preserve modern pedigrees.

Why are Dogs Extinct?

Unfortunately, every year many animal and plant species go extinct. Whether it’s due to natural causes or not, extinction is largely accepted as a part of evolution.

Canines, however, have been around in some capacity for thousands of years. When we talk about extinct dogs, we’re not discussing the species as a whole but rather individual breeds that no longer exist.

It’s also important to note that extinct dogs differ from rare breeds or what you may perceive as being popular. For instance, many people ask if the dalmatian is extinct. It’s true that this instantly recognizable breed is rare to come by (especially when compared to common breeds like labrador retrievers), but dalmatians are far from being included in our extinct dog lineup!

As previously stated, extinct dogs are often a result of human disinterest. Perhaps the breed went out of fashion so it was no longer profitable to breed. Or, more commonly, you’ll soon see these extinct dogs were bred for a niche purpose that gradually wasn’t needed.

These extinct dog breeds come from various countries and cities around the world. As decades passed by, people changed their routines of keeping dogs in their household and their purpose. Breeding has also played a factor in which dogs have become extinct. As you’ll learn, many times, extinct dogs didn’t drop off the face of the earth but were rather bred to create new breeds that are still around today.

These are just fifteen extinct dog breeds that you may be surprised to learn about:

The English terrier existed in the UK back in the 18 th century and underwent major changes in the breed. In the late 1980s, the English White terrier was born out of the need to make some breeders create new species. These new species have created versions of the small white terrier with prick ears. These pricked eared dogs such as Fox terrier, Jack Russell terrier, Boston terrier and Rat terrier became a huge existence in the UK and the US. These terriers were the dominant breeds. The English terrier could not sustain the interest in the public for long and has been erased. The UK Kennel Club rejected the breed due to the failure of the project. By three decades after its creation, the English terrier became extinct.

Luckily, we can still see what extinct dogs may have looked like thanks to portraits like this one.

Talbot existed in medieval times, when Talbot’ used to refer to as an individual hound. This dog was very common in England and originated in Normandy. This type of dog was used as a hunting hound and depicted in artwork like this as mostly small or medium-sized dogs. Though Talbots have joined the extinct dog’s list, it is believed that its descendants were still roaming around the Earth. The modern Beagle and Bloodhounds are likely the ancestors of the Talbots. This breed became extinct in the late eighteenth century but no one truly knows why.

Salish Wool dog is what refers today as British Columbia. This dog was  referred  to as a Comox dog. As the name suggests, the Salish wood dog was characterized by its white wooly fur and small build. The people of Washington State and British Columbia created this extinct dog breed. With the absence of sheep at that time, people would shear the dog’s coats in early summer to make Salish blankets and other textiles. The fur of the wool dog was very thick and rich in texture but ultimately was no longer needed as textiles became easier to come by.

Moscow water dogs were developed by the Russian army to perform water rescues. As the name suggests, Moscow water dogs existed after World War II, and the temperament of the dog was violent. These dogs tended to bite sailors rather than pull them to safety as they were intended to. By the 1980s, Moscow water dogs became extinct from the Newfoundland’s popularity and decidedly more docile demeanor.

Tweed water spaniel originated in England. These dogs were brown with athletic tendencies. They inhabited the area around Berwick upon Tweed, which is close to River Tweed and the Scottish borders. As the name suggests, Tweed water spaniels were water dogs as these dogs were located around the river. Tweed water spaniels were not well known outside the local terrain, which may have led to their extinction. This breed attempted to exist longer by cross-breeding with St. John’s water dog and local water dogs, but still  went extinct back in the 19 th century.

Kuri dog existed in New Zealand where the name Kuri came from the Maori tribes as their ancestors brought the dog breed while migrating from East Polynesia during the 13 th century AD. The Kuri dog is one of the oldest breeds to have walked on the Earth and left behind many tales. The Maori tradition believed that the brother-in-law of Maui transformed into the first dog. Kuri dogs became extinct in the 1860s when the European settlers began to flood into New Zealand. This extinction was due to the fact Kuri dogs could not survive to interbreed with European dogs.

Molossus dog was home for Ancient Greece, which was known for the Molossian hound or molosser. The existence of these dogs was very popular during Ancient Greece, which was used as an image on the silver coinage issued as the emblem of the Molossians. The ancient literature confirmed the popularity of the Molossus dog often mentioned in various writings such as Statius, Aristotle, Virgil, Horace, Martial, Lucan, Seneca and other scholars. This dog marked its history in Ancient Greece and was used for fighting, hunting and protecting the house and livestock.

The Hawaiian Poi Dog was recognizable due to its short stature and a short fur coat that came in a variety of colors. It’s believed to have come to Hawaii with the Polynesians during the first settlement centuries ago. Its sweet disposition made it a great dog to have around children, however, the Hawaiian Poi Dog was most commonly used as a food source. As other dogs were introduced to the island, the Hawaiian Poi Dog succumbed to interbreeding and became extinct in the early 19th century.

North Country beagle originated in Yorkshire and Northumberland regions of England. The North Country Beagle was a breed of scent hound. The dog had known for its fast hunting abilities and its shrill voice. The breed was common for several centuries but became an extinct dog in the 19 th century. This extinction was due to the competition from the English foxhound.

St. John’s water dog was an early retriever with its origins dating back to Newfoundland in the 16 th century. This water dog was the antecedent of Golden Retrievers and Labrador Retrievers along with other breeds. It is the founding breed, for what we know today as the Newfoundland. This dog breed was the crossbreeding of Tweed water spaniel. This dog contributed to the creation of the modern Curly coated retriever and Golden retriever dog species.

The Cumberland sheepdog was considered as the  dog breed of Lancelot Edward Lowther, the 6 th Earl of Lonsdale. This dog existed in the family for more than a hundred years. By the beginning of the 20 th century, the breed was absorbed by the Border collie. In other words, the latter breed has absorbed the former breeds. Cumberland sheepdogs are claimed to be one of the ancestors of the modern Australian shepherd.

Alpine Mastiff was one of the earliest dogs to attain a gigantic size. The dog originated from Northern Europe before 500 BC and is recognized as the ancestor of the St. Bernard breed. The largest Mastiff may have measured more than 1 m (39 in) at the shoulder and weighed up to 160 kg (350 lbs.) Since the 1970s, attempts were made to crossbreed it with the Saint Bernard, Great Dane and the Bernese mountain dog.

Blue Paul terrier refers to as many names such as Scottish bull terrier, Blue poll and Blue poll bulldog. This breed originated from Scotland and was the descendant of a bulldog and terrier through crossbreeding that may include other similar dogs. This breed was popular in Scotland back in the mid-19 century but when the popularity fizzled in the early 20 th century the he Blue Paul terrier became extinct.

Bullenbeisser was referred to as the German bulldog. This was a breed in Germany before it was extinct. Bullenbeisser was crossbred out of existence just like the Old English Bulldog. More specifically, it was a cross of Bullenbeissers with Bulldogs brought from Britain coordinated by German breeders. They created a new breed in the 1870s, which is known today as the Boxer.

Here are the 15 extinct dog breeds that you may have never knew existed . You can see these dog breeds became extinct due to the sudden changes of their habitat and purpose, but many extinct dogs are still thriving in some capacity through their ancestors after decades of crossbreeding!

No matter what dog you have, make sure you always have the right insurance for your pet!

Fatima Bhutta is an avid reader about cats and likes to blog about various content projects. Her other hobbies include reading and drawing. Working as a content writer for several months, Fatima has discovered new topics that readers can share to their friends and relatives. Educated at University of Bolton in Business, Fatima has decent knowledge about digital marketing which is the reason she likes content writing.