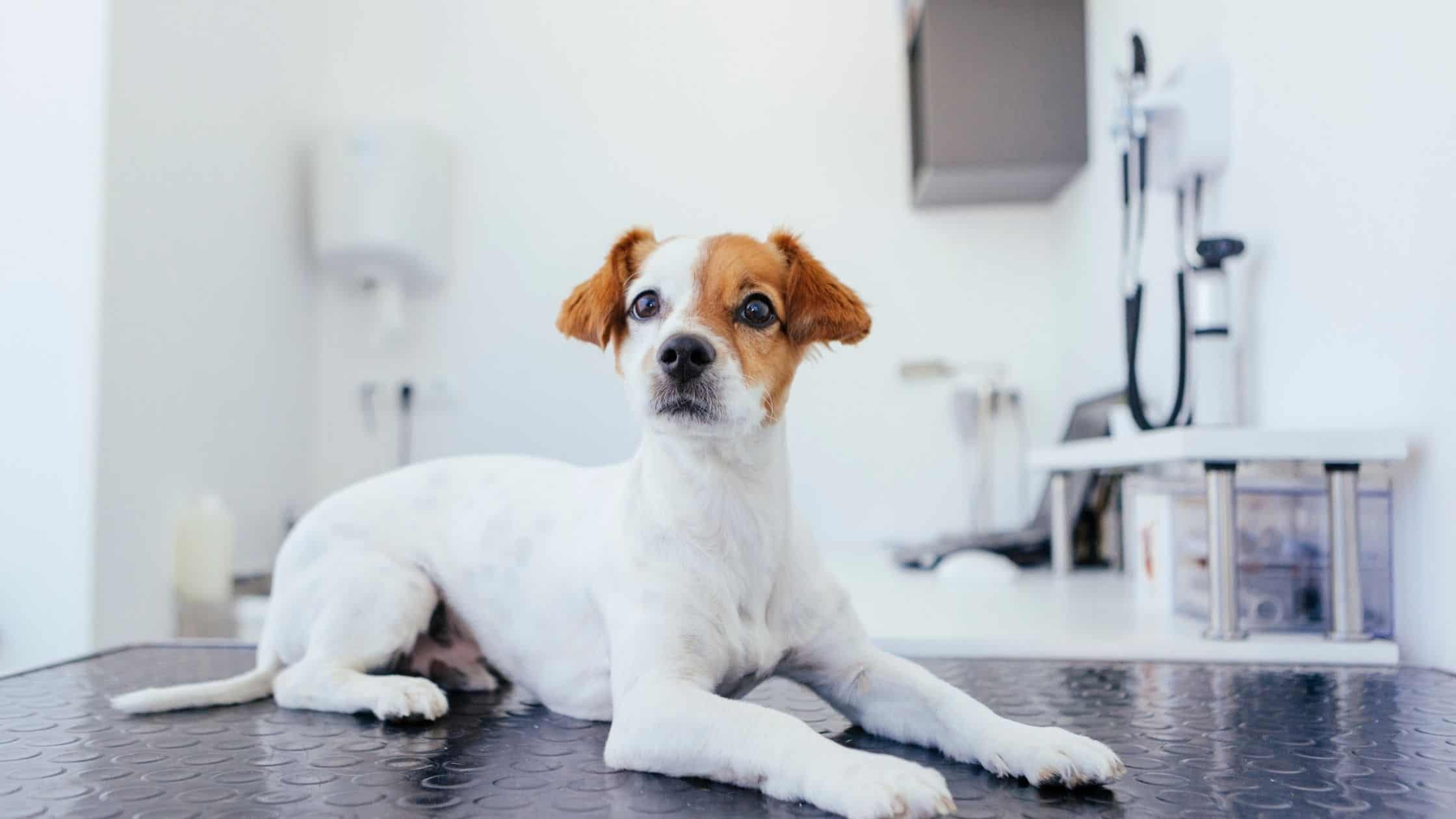 Lymphoma in Dogs: Recognizing the Signs

By Claudia Bensimoun on November 9, 2020

With National Canine Lymphoma Awareness Day on November 7, 2020, it’s important to learn how to spot canine lymphoma (lymphosarcoma or non-Hodgkin’s lymphoma) symptoms in dogs early on, so that you can visit your veterinarian as soon as possible.

As with all cancers, lymphoma is usually treated with chemotherapy which is highly effective as a treatment. It’s a malignant cancer that affects the lymphatic system in dogs.

The Morris Animal Foundation explains that “lymphoma is defined as the malignant proliferation of lymphoid cells – the cells that carry out the body’s immune function – primarily affecting lymph nodes or solid organs such as the liver and spleen. In dogs it usually presents in middle-aged to older individuals, involves multiple organs, and affects males and females equally. Many dogs are asymptomatic at the time of diagnosis with only swollen lymph nodes to indicate disease.”

With that said, let’s delve into canine lymphoma to show you the signs, and the treatments.  Here’s the take.

What is Canine Lymphoma?

A study from the University of North Carolina School of Medicine explains that “Humans and their pet dogs are close, so close that they both develop a type of cancer called diffuse large B-cell lymphoma. In humans it’s the most common lymphoma subtype while in dogs, it’s one of the most common cancers in veterinary oncology,” via Science Daily.

The study goes on to add that “Pet dogs get cancer the same way humans do: at similar rates, and for unknown reasons. Like humans, dogs’ tumors are spontaneously occurring, rather than genetically created as they are in mice, so canine tumors may more accurately mimic the situation in human cancer patients. Dogs are good models to study, because it will also be possible to study shared risk factors, in the environment, for example, that might predispose both humans and dogs to get lymphoma. Our knowledge helps dogs and humans with lymphoma.”

Lymphoma is a common cancer that can affect all dogs. With it being a progressive and deadly disease resulting from the growth of lymphoid cells, it’s best to have pet insurance from day one, so that you can take care of all the veterinary costs without having to worry about whether you can afford them.

It’s probably one of the most important things that you can do as a pet parent. Cancer can strike at any time, and when it does, it’s extremely devastating. You’ll want the best treatment for your furry best friend without ever having to delay treatment because you can’t afford it. Here’s the take with pet insurance for canine cancer.

The Animal Cancer Foundation adds that there around 6 million new cancer diagnosis made each year for dogs, and a similar amount for cats in the US. This is an extraordinarily high rate.  Lymphoma most often comes from organized lymphoid tissues as in the following:

There are other common areas that are affected by lymphoma such as eyes, skin, central nervous system, bone, and testis. It’s believed that common causes are not well understood today, but there is a myriad of contributing factors that include:

Research from the University of Leicester adds that “Nearly one out of four dogs will develop cancer in their lifetime and 20 percent of those will be lymphoma cases. In 2014, a new user-friendly electronic system for diagnosing lymphoma in dogs in the early stages, and for remission monitoring, has been developed by scientists.”

A new user-friendly electronic system for diagnosing lymphoma in dogs in the early stages, and for remission monitoring was developed by Avacta Animal Health Ltd. This test is marketed as cLBT (canine lymphoma blood test), this is the first test of its kind to track the remission monitoring status of a dog after undergoing chemotherapy.

Research at the University of Illinois at Urbana-Champaign have “identified a new target for the treatment of lymphoma and are testing a potential new drug in pet dogs afflicted with the disease. At low doses, the compound, called S-PAC-1, arrested the growth of tumors in three of six dogs tested and induced partial remission in a fourth.”

Chemistry professor Paul Hergenrother, who co-led the study with Tim Fan, a professor of veterinary clinical medicine says that “this new compound targets a cellular enzyme, procaspase-3, that when activated spurs a cascade of reactions that kill the cell.”

The study concludes “If you look at the genetic signatures of canine lymphoma and human lymphoma, they’re very, very similar and their response to therapy is very, very similar,” he said. “So there’s lots of reasons to be optimistic about a compound that has some effect in the canines, that it could have a similar effect in humans.”

Does Neutering and Spaying Affect Lymphoma Rates in Dogs?

An interesting 2020 study on neutering to avoid health risks like lymphoma offers results from a 10-year study. The researchers at the University of California, Davis, examined 35 dog breeds and found vulnerability from neutering, and the age at which they are neutered, varies greatly depending on the breed. The take with this study explains what we’ve all been wondering about. Are all dog breeds affected in the same way?

The researchers in this study say that “There is a huge disparity among different breeds,” said lead author Benjamin Hart, distinguished professor emeritus at the UC Davis School of Veterinary Medicine. Hart said there is no “one size fits all” when it comes to health risks and the age at which a dog is neutered. “Some breeds developed problems, others didn’t. Some may have developed joint disorders but not cancer or the other way around.”

The researchers analyzed 15 years of data from thousands of dogs examined each year at the UC Davis Veterinary Medical Teaching Hospital to try to understand whether neutering, the age of neutering, or differences in sex when neutered affect certain cancers and joint disorders across breeds. Cancers examined include lymphoma; hemangiosarcoma, or cancer of the blood vessel walls; mast cell tumors; and osteosarcoma, or bone cancer.

This study says that “Researchers also found the occurrence of cancers in smaller dogs was low, whether neutered or kept intact. In two breeds of smaller dogs, the Boston Terrier and the Shih Tzu, there was a significant increase in cancers with neutering.” The researchers also said that the sex of the dog sometimes made a difference.

Previous studies have demonstrated that female Golden Retrievers, regardless of what age they were spayed at, increases the risk of one or more cancers by as much as 5 to 15 percent.

There is nothing worse than finding out that your dog has cancer. When you first start noticing the initial signs, that’s the time to visit your veterinarian. Something as simple as a lack of appetite, vomiting, and lethargy for a short period of time, often takes a turn for the worst in a matter of weeks.

If you feel something is off with your dog, consult with your veterinarian. By doing this early on, you’ll probably be saving or extending your dog’s life. You’ll also be helping him with pain management. Sometimes signs of illness are so mild, but yet progress really fast later on when it may be too late. With that said, here are the signs. These all vary according to the part of the body that is affected.

There are four common types of lymphoma, each with distinct symptoms.

This is the most common form in dogs, and accounts for around 80% of lymphoma cases in dogs. Dogs with this type of lymphoma will usually show signs of fast and nonpainful lymph node enlargement. These may become 3-10 times their normal size.

In this case, you may have cancerous lymphocytes that invade internal organs like the spleen, bone marrow, liver, and other organs. Symptoms tend to show up later on in the disease in the form of large tumors together with lethargy, nausea, fever, lack of appetite, and weakness.

This is not as common, and usually accounts for less than 10% of lymphomas affecting dogs. The symptoms may show up as loss of appetite, stomach upset, vomiting, and abdominal pain. Dogs may also be prone to diarrhea, and continued weight loss because they’re unable to digest food properly.

Treatment for alimentary lymphoma is more difficult if the lymphoma has spread with a 3-months survival rate. With that said, if the lymphoma only affects one area, it can be treated affectively with surgery to remove the tumor.

This too is also not as common, and dogs that are affected will have an enlarged thymus, lymph nodes or both. As the disease progresses, dogs may have difficulty breathing due to fluid buildup in the chest which puts pressure on the lungs.

Additional symptoms include excessive urination and thirst that may be caused by a calcium increase in the blood.

A combination of radiation and/or chemo for dogs with mediastinal lymphoma can result in better survival rates, as well as quality of life scores.

That said, remission is usually 6- months for T-cell lymphoma. It’s important to keep in mind that dogs that have a high level of calcium in their blood will have a less prolonged survival rate.

Skin lymphoma in dogs can show up as single, or multiple raised sores that take a while to heal, and that may be widespread. These can also be scaly. Symptoms can range from difficulty breathing, blindness, seizures, and even kidney failure.

Dogs with extra nodule lymphoma affecting the skin will have chemo, surgery, and radiation. That said, sometimes the disease is not responsive to treatment.

Lymphoma is easily diagnosed. Your vet will test the affected organ system. Dogs that have been affected with multicentric lymphoma usually undergo a needle biopsy of the large lymph nodes.

Treatment plans for individual dogs will vary according to the drugs used, dosage, frequency, and how long the treatment goes on for.

If dogs in treatment don’t respond to treatment, they will have their treatment plan changed, which may include radiation and new drugs.

They add that the following dog breeds may have a disposition to lymphoma. “Any breed that have a higher than average risk of developing this disease and include  Rottweilers,  Scottish Terriers,  Bullmastiffs,  Boxers, Basset Hounds,  Airedales,  Saint Bernard’s,  Bulldogs, and  Golden Retrievers. Dogs with a lower risk include the  Dachshunds  and  Pomeranians,” via Canna Pet.

Taking out a comprehensive pet insurance to help cover veterinary bills always makes sense, and should be done as early on as possible.

Veterinary costs are usually always affordable, unless an emergency comes about like cancer treatment or an injury. Make sure that you have the financial resources to take care of your dog and to purchase a health insurance to maintain your furry best friend’s well-being and longevity.

As usual, feed a high-quality diet, and learn more about the ingredients that you’re feeding. Regular exercise combined with plenty of off-leash active exercise allows for mental stimulation and less behavioral issues, and contributes to a healthy lifestyle and your dog’s well-being!